I did my absolute best to make a total mess out of getting to the national park. I was given very specific, accurate instructions and managed to ram these through the blender of mind which resulted in me wandering around a very busy, very hot road system in Miri. However, more by chance than anything, I found the long distance bus station and managed to get to the park (no stop so you have to get the driver to drop you off) at blistering 12.00.

I spoke to the very pleasant person at the office who suggested an extremely unambitious walk which I, being British, agreed to and instantly ignored. This was a very exciting first few steps for me because I’d been in the jungle before, but never true tropical rainforest. After only a few minutes civilisation felt a long way behind, but I felt something was missing almost straight away and this was a feeling that persisted the entire walk. When I looked later the park has been stripped of the vast majority of its mammal population and much of its birds too due to the relative isolation of the rainforest and poaching. However, it was still enchanting and there is a massive amount of life in every direction. 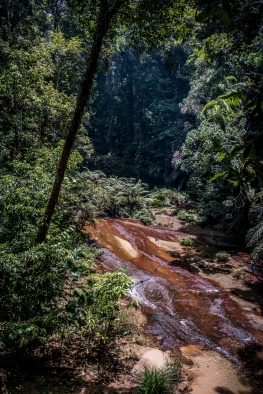 As I made my way to the summit of one of the hills I was aiming for I realised my heart was going hell for leather which my Fitbit was happily reporting. Indeed it was higher than I see whilst rowing. I couldn’t believe the numbers, but apparently, when I looked later, extreme temperatures (and my lack of acclimatisation) can lead to elevated heart rates. I pushed on trying to keep to a steady pace before the forest gave way to a small summit and a magnificent view. What the people who first saw this unspoilt view must have felt I can only imagine, but I found it breath taking even in its somewhat restricted state. It’s here that I first saw the Palm Oil plantations which you’d have to be in quite a state of denial to not notice. Palm Oil is a blight and there is just no other way of perceiving it. It’s entirely useless for most animals (some Macaques eat the fruit I’m told) and the diversity is non existent in the plantations. For the British reader imagine a pine planation versus ancient forest and you get the idea. All of this so people who already produce crap food (Doritos and pretty much any junk food in packets) as well as cleaning products can make it crapper and cheaper.

After heading back down the rise I headed deeper into the park to find some waterfalls and other things to see. In truth these were a little disappointing, but this was journey not the destination time and I didn’t mind. I then made my way back and realised the heat and the walk (which later I realised was more of a walk than a round trip to the summit of Scafell Pike and back) had taken a lot of out of me. It’s worth considering that I’d had a 29 hour journey and 4 hours of sleep! I got to park HQ and some cold drinks which I absolutely nailed before flagging down a coach to take me back to town.